We are specialized manufacturer from China, 2 Layer PCB board, double Sided Fr4 printed circuit board supplier, we have the perfect after-sales service, advanced PCB manufacturing process and equipment, and technical support. I look forward to your cooperation!

While single-sided PCBs are ideal and straightforward to use when possible, many circuits require two sides. Double-sided PCB boards offer a wide variety of possibilities for circuit board designers because they have more surface area and flexibility when routing traces. Using two sides instead of one also allows for a smaller board size overall, which can be important when building small-scale, integrated devices. Double-sided PCB is one of the most common types of PCBs. Moreover, the two-sided PCB and the single-sided PCB are the same to some extent. The difference is that the single-sided PCB has only one conductive surface. That is to say, the single PCB has copper on one side of the board, but the two-sided PCB has a conductive layer on each side. The dielectric layer is surrounded by the copper layer of the circuit and welding masks on both sides. Technically, single-sided circuit boards will not be copper plated in boreholes. Passing holes allow manufacturers to create traces on both sides that are adjacent to each other and connected between layers. PCB manufacturers use double-sided PCBs for products that require elementary to intermediate circuit complexity. This type of PCB does not provide as much circuit complexity or density as multi-layer PCB, but it is the most economical choice in many applications.

Nowadays, double-sided Printed Circuit Boards can be designed and manufactured in a variety of ways, including silver and gold surface treatment, high and low temperature, and solder coating. This versatility enables them to power almost unlimited numbers of projects at cost-effective prices. Because of these advantages of double-sided PCB, double-sided PCB technology has become the most popular type of PCB in the industry.

What is Double-Sided PCB?

The Double-Sided PCB is one kind of critical PCB board that is useful in the PCB industry.

Strictly speaking, the Double-Sided PCB is one kind of critical PCB board that is useful in the PCB industry. They allow for the routing of traces around each other by jumping between a top and bottom layer by way of vias. Generally speaking, there are lines on both sides! The standard PCBs can be seen, such as Rigid PCB, Flexible circuit board, Aluminum PCB, and Metal Core PCB.

It needs circuits on both sides. Via is the holes on boards, coated with metal, and it can connect wires on both sides. Because the area of Double-sided PCB is twice as large as the Single-sided PCB, and because the wiring is interleaved, which is better suited for more complex circuits.

Double-sided circuit boards are one of the most popular types of PCBs as they enable manufacturers to produce more complex circuits, which can benefit uses in higher technology applications and electronics. There is an abundance of apps and electronics which double-sided PCBs can be used in, including lighting systems, vending machines, amplifiers, car dashboards, and many more.

Material for production of double-sided PCB

The manufacturing base material of PCB is a rigid glass fiber laminate. In the actual manufacturing process, many types of PCB materials can be used. Which content to use is determined by the PCB designer to meet electrical, temperature, and other related characteristics. However, the standard material commonly used is fiberglass, which we usually call FR4.

FR, which technically stands for “flame retardant,” does not mean specific material, but refers to material grade. However, it is a glass fiber reinforced epoxy laminate with flame retardant standard UL94V-0.

FR4 is the most common and typical choice of rigid PCB materials. Usually, we classify them into three categories: Double Sided PCB-Top Side and Button Side 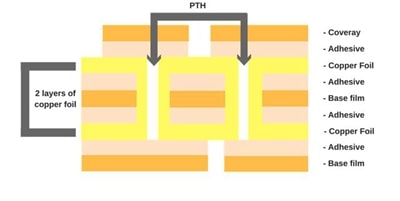 Double-sided PCB is a widely used component in various applications because it can achieve greater flexibility in designing more complex circuits. The following are some advantages of double-sided PCB:

By having conductive layers on both sides, the component space of double-sided PCB is twice as ample as that of single-sided PCB. It can quickly increase the density and complexity of the circuit.

Double-sided PCB is the same size as single-sided PCB, but has twice the component space. Design more complex projects with the same amount of space.

Double-sided PCB can be used in a large number of projects, and the price is lower than multi-layer PCB, avoiding paying extra costs.

At relatively low cost, you can significantly expand the number of projects available for your functions and budget. You are creating innovations that a single-tier PCB cannot achieve.

Redirect the PCB current while keeping the top free

You can use the bottom of the double-sided PCB as grounding copper casting for sinking and output current.

How to make Double-sided PCB

JHYPCB is a professional PCB manufacturer that can help you to manufacture custom double-sided PCB to meet your specifications at a competitive cost. Contact JHYPCB to find out how we can help with your application.