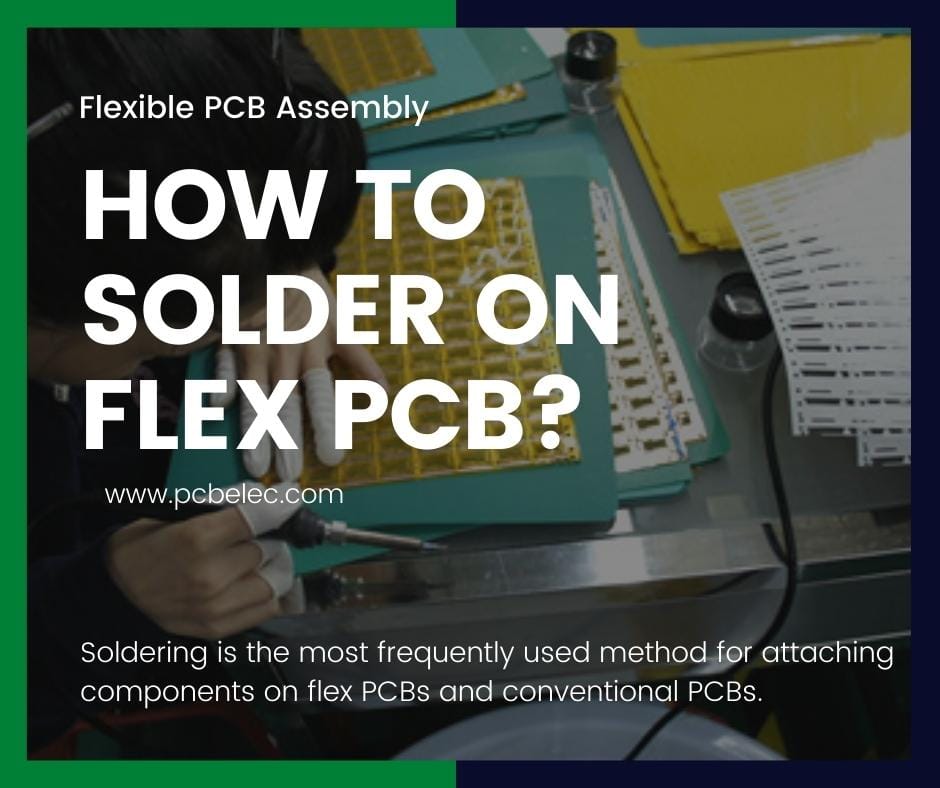 Flex PCB (Printed Circuit Board) is a unique form of conventional PCBs with unique capabilities. Despite having similar features as conventional PCBs like high density, reliability, and flexibility, flex PCBs offer greater flexibility and higher temperature resistance and can assume a 3-D configuration. 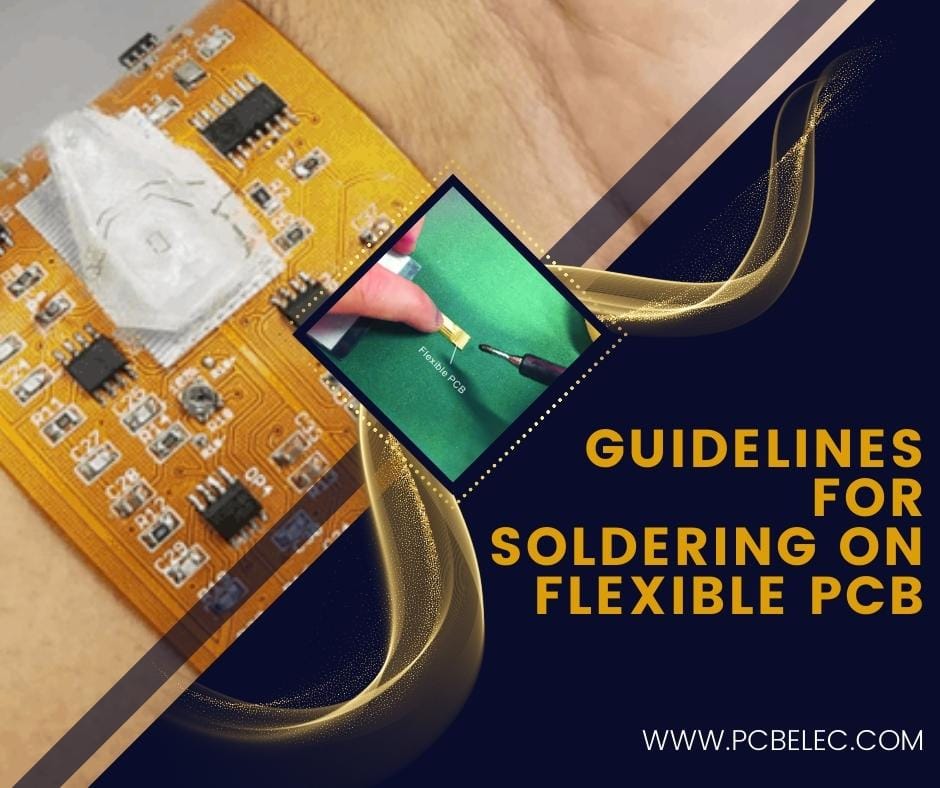 Soldering of flex PCBs requires specific components which must meet certain technical requirements. Technicians who are experts in this process must possess the requisite technical skills as professionals. Although PCB engineers often sometimes make errors when soldering flex PCBs, the consequences of such an error can result in substantial financial costs, in addition to increasing in turnaround time. In this article, the various ways to solder on flex PCBs will be discussed.

Step1. Use the Right Temperature For Soldering on Flex PCBs

A typical single-edged flex joint needs a soldering temperature of between 330°C and 400°C. In general, using the least temperature to avoid any damage that might be a result of exposure to high temperature and heat is the best.

A flex printed circuit board is quite thin and so heat control and regulation are important. In every electrical device, too much heat is of great concern. Electrical devices that don’t dissipate heat effectively can cause danger. For instance, it is no news that a cell phone battery can explode as a result of overheating.

A flex printed circuit board is an electrical conductor. As a PCB designer and engineer, you must create a means for heat to be dissipated, otherwise, this can cause damage to the electrical circuitry in flex PCBs.

To ensure a flexible printed circuit board dissipates heat during flexible PCB soldering, ensure you use components with a unique surface-area-to-volume ratio. Use compact designs to minimize the thermal pathway. This method of soldering flex PCB helps to minimize the build-up of heat.

During flexible PCB assembly and soldering, manufacturers often place return and signal lines over one another. This is done on adjoining layers to minimize EMI (Electro-Magnetic Interference). This makes the entire flexible circuitry less thin, which creates an effect known as the ‘I-beam effect’. If you will be using the EMI technique during flex PCB soldering, ensure you spread all the pairs of lines to minimize the I-beam effect.

This method of soldering flex PCB can be challenging. Use a flux pen. The flux helps to clean and etch the oxides on the surface of the flex PCB, improve the solder flow, and avert copper oxidation after heating. It reduces the tension on the welded surface while ensuring that the molten solder spread and penetrate easily.

Solder paste printing is one of the most critical links in the flexible PCB surface mount process. To obtain the precise amount of solder paste and the alignment of components and pads, we need to use a tool called SMT Stencil.

Related Reading: How To Clean The Solder Paste On SMT Stencil

In soldering SMT capacitors and resistors on flex PCB follow these steps:

Use either double-back scotch or carpet tape and a transparent film. Laminate the backside of the flex PCB. This helps to reduce stress concentration at the edges of the devices to be mounted on the flex PCB.

Step8. Cleaning Off Residue of Flux

The soldering process in flex PCB involves cleaning off residues from the soldered joint. If you are making use of a no-clean flux, you might not need to be worried about any residue of flux, otherwise, the waste could make the solder joints corrode and cause damage after some time. Do not forget to use electrical tape and place it over the front end of the traces.

Step9. There should be Flexibility for the Stiffeners

Do not forget to remove the adhesive squeezing after the dielectric lamination of the film if you are considering cover films. Otherwise, the process of soldering might become harder.

Generally, the flexible circuits in the flex PCB become evident during etching or copper plating. The exposure of the circuitry can result in dimensional changes. The design of the flexible PCBs and its soldering process requires a significant amount of tolerance for the cover films, as well as stiffeners.

How to Solder Flex Circuit Boards by Hand (DIY)?

Suppose you are an electronic engineer, hardware engineer, or electronic hobbyist, and you want to solder electronic components on the flexible PCB by yourself. In that case, you need to prepare the following tools first:

Flex PCBs are known for their flexibility. They can be folded or bent easily into several configurations of your choice. However, the process of soldering flex PCB can be complicated. To correctly and successfully complete the process of soldering a flex PCB, technicians and manufacturers must understand the rules that accompany the design of flex PCBs and how to solder on flex PCBs as discussed in this article.

A flexible PCB coverlay is applied during the manufacturing process of flexible PCBs to enclose and provide protection to the copper structure (external circuitry and wiring) of the flexible PCB. It is a covering film that is made of a thick sheet of either acrylic or polyimide and a flexible

FPC flexible PCB is a highly reliable and excellent printed circuit board made of polyimide or polyester film as the base material. FPC is the abbreviation of a flexible printed circuit board, which has the characteristics of high wiring density, lightweight, and thin thickness. FPC is mainly used in mobile

In the EMC design of the PCB, the first important thing is the setting of the layers. The number of layers of the single board is composed of the number of power, ground, and signal layers. You need to arrange them according to the requirements and needs. Once you are

The Growth of PCB Industry Due to 5G

With the increasing requirements for “light, thin, short, and small” printed circuit boards, the demand of downstream industries has gradually shifted to higher-end products. FPC boards, HDI PCBs, and high-end Multilayer PCB board technology have become the main direction in the future. The downstream applications of the PCB industry are

What does PCB open Circuit Mean?

PCB open circuit is a problem that every PCB manufacturer encounters almost every day, plagued by production and quality management personnel. Insufficient shipments, replenishment, delivery delays, and customer complaints caused by PCB open circuits are difficult problems for the industry. The PCB open circuit is actually the two points (point

What is a Multilayer PCB and What are the Advantages?